The Criminalization of Anti-Mining Social Protest in Peru

Dr. Triscritti is post-doctoral research scholar at the Center for International Conflict Resolution (CICR) at the School of International and Public Affairs (SIPA).

In Africa, Asia and Latin America, the development of the mining industry has often been accompanied by violence and community-led social protest. In the presence of fragmented societies and fragile governance structure, such as the Democratic Republic of the Congo, Papua New Guinea and Sierra Leone, mining has fuelled conflicts and civil wars. But even in contexts where democratic institutions are consolidating, such as Indonesia, Peru and South Africa, mining has been a latent attractor for social protest over community rights, fiscal policies and labor and environmental standards.

To halt these protests, young democratic institutions have, in various cases, turned to authoritarian dogmas. Civil rights and freedoms, normally guaranteed under the constitution, have been suspended in attempts to reinstate order, and security forces have responded to violence with violence, implementing counterterrorism practices.

What is happening in Peru illustrates this argument.

Peru is rich in mineral resources. In 2010, Peru, a country the size of South Africa, was the world’s largest producer of silver, second-largest for copper and zinc, third-largest for tin, fourth-largest for lead and molybdenum and sixth-largest for gold. 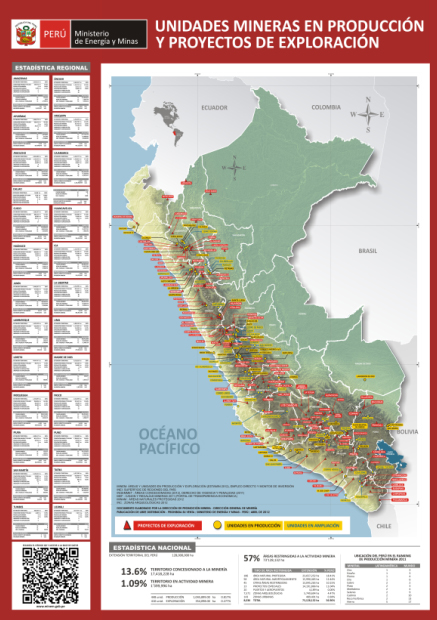 Peru is also a young consolidating democracy, where social tensions over the management of natural resources have repeatedly plunged the country into political and social chaos. Such tensions, originate from the absence of dialogue among stakeholders. When the central government licenses a mining corporation to explore and exploit mining concessions, in remote areas, regional authorities and local communities have limited rights to negotiate their interests and preserve their livelihoods. As local communities struggle to make their voices heard, they often resort to violence in order to express their discontent. Since January 2006, the number of conflicts per month has tripled; in that same time, over 2,400 have been injured and over 200 have been killed in clashes.

To halt the civil unrest related to large-scale mining, the Peruvian government has increasingly resorted to declaring states of emergency. When a state of emergency is declared, local police are granted special powers in conflict areas and the presence of riot police and the army is increased. Simultaneously, civil liberties are restricted and freedom of assembly is suspended, and anti-mining leaders and local authorities are swiftly arrested, without notice or warrant, under accusations of having violating such restrictions (though they are usually later released).

The following two examples illustrate these practices. In both cases, a state of emergency was declared immediately after protests resulted in casualties, while dialogue among stakeholders was still ongoing.

Here is a video of his arrest is on YouTube:  www.youtube.com/watch?v=8spwndB_M2M

The Peruvian Government, when accused of using force instead of dialogue to resolve anti-mining conflicts, has argued that it uses force because protesters are “violent radicals, extremists or terrorists” and because dialogue is not viable. While in some cases this may be accurate, it should not account for the use of real bullets against protesters, random acts of violence or convenient arrests of grass-roots leaders. Moreover, in situations of similar social tension, but unrelated to large-scale mining, such as clashes occurred between fishermen in Paita (northern Peru) and the police, in April 2012, the Peruvian Government has been able to successfully mediate solutions and to manage conflict with less violence. Grass-roots movements argue that this is not a simple coincidence, but a deliberate intention of the central government to criminalize anti-mining social protests.

Conflict resolution experts and mediators agree that dialogue and respect among stakeholders are necessary conditions for halting conflict. As a result, the use of states of emergency and the criminalization of protests significantly decrease the chances of reaching durable and peaceful agreements.  They engender a sense of mistrust among stakeholders and fuel conflicts, with governments viewing protesters as criminals and with protesters accusing governments of backing the interests of mining corporations. The unintended consequences of these practices are often the failure to reach a sustainable common ground and the escalation of violence in conflict areas. I totally agree that social dialog is important to find a sustainable political solution to this kind of conflicts. There are other good examples like the one applied in the so called Quellaveco Model in Peru.

I really appreciate your contribution. Promoting this kind of debate help us to improve our views. Certainlly, your article is part of the solution!

It does give you a feeling of deception when someone, who has a higher education degree and further a doctoral degree, gives an opinion about an issue with total disregard to the facts and lack of objectivity that is expected from a political pundit but certainly not from a serious doctoral professional. One needs only to read the title of her article to understand that she is not interested in seriously commenting and/or exposing whatever tensions are being generated by the mining activity in Peru but instead wants to shape events to fit and support her catchy title and look… Read more »