Universities have been providing places for students to refill water bottles making them viable alternatives to bottled water. These extra spigots are sometimes known as hydration stations. Source: University of Vermont, University Communications

The University of Vermont is set to join a small but determined group of universities by moving to end the sale of bottled water on campus as of January 2013.  Ending a ten year contract with Coca-Cola has allowed for increased options as the university attempts to reduce their environmental impact by cutting down on bottled water and to provide healthier options to students.  As in most of these situations, students pushed for change collecting well over a thousand signatures in favor of a “sustainable beverage system” and citing issues such as the oil required to make plastic bottles, the water that went to waste in the process (about three liters of water are required to bottle just one), the lack of recycling that takes placed with disposed bottles, that the bottled water is often sourced from tap water, and that their particular water supply was one of the cleanest in the country.  Although the university imposed change has yet to take place, students have already succeeded in reducing sales from 362,000 to 235,000 bottles per year between 2007 and 2010.

Since bottled water is often cited as a convenience, places such as the University of Canberra in Australia have installed water vending machines that charge students to refill containers, though the prices are lower than they would have been for bottled water.  Others have installed something called hydration stations, which are essentially drinking fountains with an extra spigot making it faster and easier to refill bottles.  It has yet to be seen whether these changes will end up increasing the purchases of soft drinks as some claim it will.

As with most changes not everyone is happy about these developments, at the College of Saint Benedict in Minnesota, following the ban the Minnesota College Republicans handed out plastic water bottles to students claiming that the new policy deprived students of the right to choose.  Other criticisms include claims that people will tend to choose less healthy options such as soft drinks, that bottled water is simply convenient and even hydration stations or similar options will not be at the same level, that students may rightly be wary of unclean tap water especially at older schools, and as mentioned earlier that ultimately consumers should be able to decide for themselves what they buy. 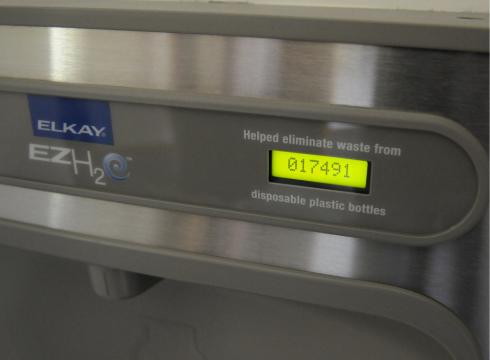 A hydration station at the College of Saint Benedict in St. Joseph, Minnesota tells students how many plastic disposable bottles have been saved due to the usage of refillable water bottles. Source: USA Today

Others assert that there is a surprisingly large amount of misinformation circling that unfairly portrays the detriments of bottled water.  The proponents of this include Chris Hogan, a spokesman for the International Bottled Water Association.  An editorial by John B. Challinor II, Nestle Waters Canada’s director of corporate affairs, elaborates on this point of view claiming that bottles are made in a more environmentally friendly way than is usually portrayed and that a ban would be largely irrelevant since bottled water is a competitor of other bottled beverages, not tap water.  Beverage companies such as Coca-Cola also have come out against these bans claiming, among other things, that people tend to hugely overestimate the scale of bottled water’s effect on landfills.  John Sicher, editor and publisher of Beverage Digest, points out that “Consumers have spoken” and they “like bottled water and that will remain for the foreseeable future”.

On the other side of the issue, are the groups pushing for change arguing that a ban on bottled water will help protect the environment while reducing campus beverage costs and improving the universities’ images as they “go green”.  Other points made are that for the most part bottled water is not really better for you than tap water and the idea that as a “basic human right” water is not something they should have to pay for.  Therefore, despite the criticisms they encounter, movements to ban bottled water have been gaining traction in various universities across the country as well as in other parts of the world.

Kind of a ridiculous idea if you ask me. The best way that universities (and everyone else) can contribute to a drop in bottled water consumption is to have clean, working water fountains in more locations. These are far too few and far between, both on campuses and in places like shopping centers, municipal buildings, and offices. We are using legal means to deal with cultural norms in a way that is heavy handed. The effects will be minimal, and the smoke caused by all the complaints will be considerable. If we want to save water (and everything else) how… Read more »

I bought my Gobie H2O filtered water bottle about a year ago and not only have I stopped adding to the number of one time use water bottles, I also know I have clean water when I drink it. You can’t say that for sure from a water fountain or from any “bottled water”. Also I save money because I can fill up my filtered bottle at any bathroom sink, outside water hose, water fountain or just about any where I go. It has a wide mouth so I can even add ice. It just makes sense.

Bottled water is silly — but so is banning it – News Watch

[…] more than 100 comments. Columbia University’s Water Center posted an essay last week asking, “Should Universities Ban Bottled Water?” which is getting a little of Twitter […]

I regularly travel with a Gobie water filter bottle as mentioned above and it’s been absolutely fantastic, particularly in areas of the world where sanitation is a little limited.

Should bottled water be banned? It’s very wasteful of resources, not just the bottle, but shipping, manufacture and proper disposal / recycling – but then so are soft drinks and they’re not going to be banned in a month of Sundays.

We all have different views on whether to ban the bottled water completely or not. But in doing the first step in going green, i see nothing wrong with it if you are helping the community and your health. It is indeed costly, but would the outcome be worth it in the end?

Bottled water should be taxed, just like cigarettes have been taxed. It is BAD for the environment. From the WATER wasted to actually create the disposable plastic bottle to the waste created to actually recycle it, IF you are one of the 30% who actually recycle it. And even for the recyclers. That bottle does not magically get picked up and refashioned to become another bottle. That bottle sits and sits until it is picked up by a human in a Middle East oil guzzling truck. It is then dropped off at some recycling plant where it is chopped up… Read more »